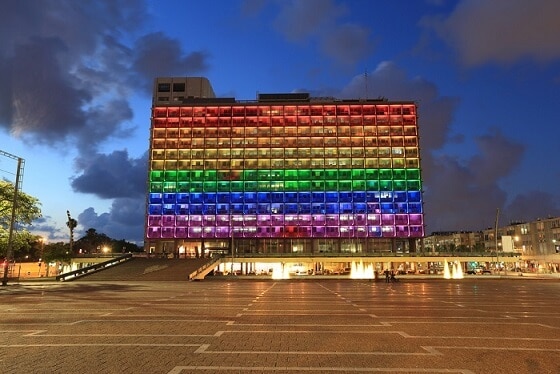 During the worldwide COVID19 pandemic, a lot of the businesses listed below are going through tremendous changes. It is strongly advised to double-check each one.

As the spiritual capitol of liberalism, freedom and equality in Israel, and the gayest city in the Middle East- no wonder Tel Aviv became one of the world’s top destinations for the LGBTQA community. The city that never sleeps offers you an endless stream of experiences, possibilities and unique people to meet, created by a proud culture and community that blossomed against all odds.

Tel Aviv’s nightlife is often described as one of the most exciting in the world. The Tel Aviv gay scene revolves around weekly parties, which tend to be gigantic events, usually full of dancing, alcohol and other things... Among the most popular gay bars or clubs are: The Block, a large arena near the Tel Aviv Central Bus Station. Tinofet, the hottest gay hip hop line at the Lima Lima Club. Arisa, a huge line usually held monthly at Ha'Oman 17, with Middle Eastern music. Beef (aka Tel-A-Beef), a male-only gay nightlife and lifestyle group targeting bears, masculine and fetish guys. Shpagat, several blocks from the famous Rothschild Boulevard, is one of Tel Aviv’s most popular gay bars. Amazona, at Lillenblum 23, considered as Tel Aviv’s premier Lesbian bar.

The city’s incredible Mediterranean beaches are internationally adored, not only for their crystal clear waters and white sands, but also for the ridiculously high number of attractive people frequently visiting them- mainly at Hilton Beach (in front of the Hilton Tel Aviv hotel), and Gordon Beach - where singles, couples and friends all gather to enjoy the sea, sun, sand and wind.

Tel Aviv Pride has rapidly become one of the most popular pride parades in the world. More than 250,000 people attended in 2019, both Israeli and foreign. The parade is typically held annually on the first weekend of June, kicked off at the Tel Aviv Municipal LGBTQA Community Center, marches the streets in the heart of the city, ending at the Tel Aviv Beach.

The Tel Aviv Municipal LGBTQA Community Center at the Meir Garden is best described as the heart and soul of the community in Israel. The building regularly hosts youth LGBTQA groups, galleries, theatre and many other LGBTQA oriented events. The Tel Aviv’s International LGBTQA Film Festival (aka TLVfest) is a unique annual event in which the Tel Aviv Cinematheque celebrates both local and foreign filmmakers with public screenings of films, panel discussions and more. Narkis Tepler, a lesbian electronic music creator, DJ, entrepreneur and event producer, operating for over 15 years in the Israeli and EU electronic music scenes. Omri Golzak, a Tel Aviv based queer tattoo artist, calligrapher & graphic designer. Sky Rikon, a unique hairdresser that runs the queerest barbershop, located in Shapira neighborhood. Uri Karin, a multi-talent artist: poet, drag queen and activist, aka "Holeket" (penname) aka "Shoshana Bein HaChochim" (drag nickname). Shahar Kahlany, a talented artist that created a fresh new small business, UrbanMasksTLV – where you can find beautiful face-masks with glorious patterns such as unicorns, the Little Mermaid and colorful Pride colors. During these troubling times, these innovative masks will surely put a smile under your mask. So what are you waiting for? Knock on your red slippers and follow the yellow brick road over the rainbow